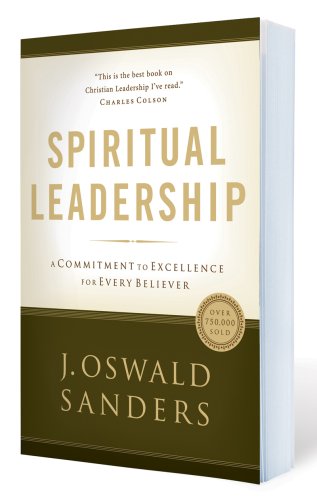 Every leader going into Christian ministry should read this book!

Unlike many “Christian” leadership books Spiritual Leadership actually get’s it’s content directly from God’s Word. J Oswald Sanders is a master at hitting on the topics that Christian leaders most commonly face. He brings scriptural principles to life with practical illustrations and hard hitting truths. Some of the points he highlighted are…

Leadership is an Honorable Ambition

Sanders assures us that Christian leadership is an honorable ambition as long as we are not doing it for ourselves.

“Should you then seek great things for yourself? Seek them not.” Jer 45:5

Selfishness has no place in the life of a Spiritual leader. We are called to serve.

Sanders helps leaders look at the Biblical qualifications of leadership. Through out the book, Sanders reminds us that character and servanthood are the bedrock on which the leader must base his ministry. There is a reason leaders in the Bible are most commonly called servants.

The leader must exhibit natural and spiritual leadership. “The best test of whether one is qualified to lead, is to find out whether anyone is following.” (DE Hoste) You are not a shepherd if you don’t have any sheep!

Prayer is the work of the ministry. A spiritual leader must set the example of prayer to his people. If he is not much in prayer he probably won’t be much of a leader. Sanders writes “The spiritual leader should outpace the rest of the church, above all in prayer (83).”

Sanders shares a powerful chapter on the importance of keeping the mind sharp through reading. He writes, “If a man is known by the company he keeps, so also his character is reflected in the books he reads (104).”

Leaders must be willing “to pay a price higher than others are willing to pay” (115). Spiritual leadership is not for the faint of heart! It is a perilous occupation.  As leaders we face self-sacrifice, criticism, rejection, pressure, loneliness, and fatigue. He writes, “The world is run by tired men.” It is hard but it is worth it!

“The ultimate test of a person’s leadership is the health of the organization when the organizer is gone (143).” Leaders who are worth their salt will replace themselves. Raising up more leaders and delegating is the mark of a great leader.

There is no reward for doing more than your share of the work! Sanders quotes DL Moody in saying, “he would rather put a thousand men to work that do the work of a thousand men” (137). You are not leading if you are doing everything yourself.

Do yourself and your church a favor and devour this classic book!  The kingdom of God will be better for it!

Meaningful last day talking about evangelism and discipleship! Here are few other photos of the weekend. Pray now for God to spark a movement at OU of people being saved, discipled and sent by Jesus.
Another great day in Norman meeting up with mentors Max & Kels and my long time friend John Mark. Also made it to Mardel for some discount books and drove around campus. Pray for me tonight as I speak to their retreat about Cultivating Character. Ask God to motivate the students to do whatever it takes to build a solid foundation in their faith that will last even though storms.